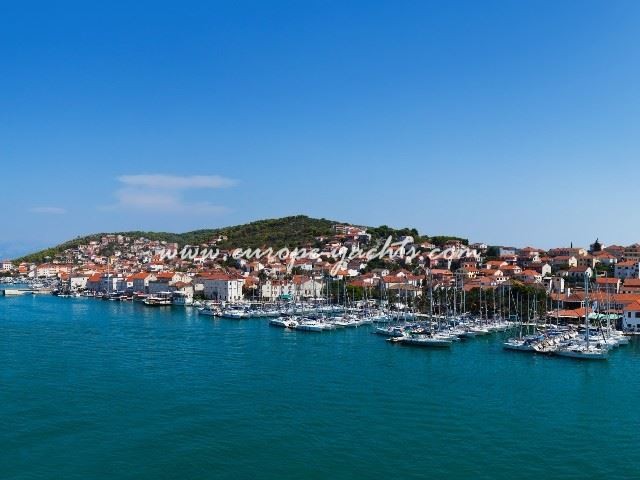 Trogir is located near Split, with population of 11 000 inhabitants. Early History. The exceptional natural conditions in this area made of it possible for man to settle here very early in prehistory. Trogir is situated on a small island in the straits between the mainland and the island of Ciovo. The surroundings, on the mainland, also offer a large fertile area in Dalmatian terms. In the area around the city there are traces of life from the early Stone Age (Palaeolithic) which are at least 50 000 years old. Within the old city centre itself some pre-historic ﬁnds have been discovered, the remains of houses and fragments of pottery, some of which are dated from about 2 000 years BC The form of the present day historical city centre, an irregular circle, was probably determined by the natural conﬁguration of the sand-bar shaped by the sea. As early as prehistoric times the settlement on the site of present-day Trogir was the centre for the various fortresses in the area, that is fortiﬁed settlements or fastnesses belonging to the lllyrian tribes. The Greek Era. At the end of the 3rd or the beginning of the 2nd century BC, Greeks from Issa (a settlement on the site of present day Vis) founded their own settlement, Tragurion, on the site of what is now Trogir. The name Trogir actually derives from that name (in Latin “Tragurium”, and in Italian “Trau). The ﬁrst records of Tragurion are to do with an attack by the lllyrian Delmati tribe on Greek Tragurion and Epetion (now Stobreé, near Split). From this time, there are some archaeological ﬁnds: an altar to the goddess Hera near the cathedral, an inscrip- tion mentioning community ofﬁcials, remains of the city walls and houses, and others. The Roman Era. Tragurium developed in the shadow of not-far-distant Salona (19 km), the metropolis of the large Roman province of Dalmatia.

The city loggia is on the city square and has served many purposes in its history. First of all it City  was a court, mentioned as  early as the 14th century. Its  present appearance was  completed in the 15th  century, when Nikola  Firentinac chiseled the relief  over the judge’s chair. On  the outer wall of the loggia,  facing the tower with the  city clock, chains are still  hanging which were used to  hold offenders condemned  to public ridicule. Inside the  loggia is a relief, the work of  Ivan Mestrovic (s. Sibenik,  Drnis), showing Petar  Berislavic’ of Trogir, a great  ﬁgure in Hungarian and  Croatian history. He was  bishop, then, amongst other  honours, he was a Croatian  Ban and was killed in 1520  in the struggles against the  Turks. He fought in defence  of his homeland with all he  had, even selling his  property. His heroism is  retold in Hungarian and  Croatian literature of the  time. The house where he  was born has been  preserved almost intact in  Trogir. He fled from there as  an opponent of the  Venetians.  The city clock tower  rises over St. Sebastian’s  Church (Sveti Sebastijan)  and was built in the 15th  century, in gratitude  for salvation from the pla-  gue. The sculptures of  Christ and St. Sebastian  were carved by Nikola  Pirentinac. On the eastern  side of the tower, in a  neighbouring courtyard,  there are the ruins of an  early medieval chapel, St.  Mary’s (Sveta Marija).  The Duke’s palace“  (Knezeva palaca was built  in the 13th century and  received its present appearance in the 19th century  when it was restored to its  condition of the 16th  century. On the facade,  there are Renaissance windows on the ground ﬂoor  which would seem to indicate that this is the work of  Nikola Firentinac from the  15th century. The  upper windows and with  the overall Mannerist composition of  the facade is attributed to  Trifun Bokanic, a master  from the end of the 16th  century. ln the courtyard  there is a Gothic staircase,  which has also been heavily  restored, dating from the  15th century. lt is traditio-  nally attributed to Matija  Gojkovic. Also in the  courtyard there are several  fragments, some of which  belonged to the city hall,  and some, in the spirit of  19th century Romanticism,  were brought from other  buildings in the city.  The large and small  Cipiko Palaces are on the  western side of the city  square. ln the Renaissance  courtyard of the smaller  palace there is a relief with  the ﬁgure of a humanist, the  work of lvan Duknovic. The  large Gipiko palace has a  Gothic triforium carved by  Andrija Alesi. The southern  Renaissance portal is the  work of Nikola Firentinac;  the portal facing the cathedral is the work of lvan  Duknovic. Inside the palace  there is a ﬁne example of a  Gothic and Renaissance  courtyard. ln the atrium  there is an exhibition of  sculptures with the ﬁgure of  relief a cockerel.

The island of Ciovo has 6 settlements: Ciovo, Arbanija, Slatine, Zedno, Gornji Okrug and Donji Okrug. lt is joined to Trogir by a drawbridge. On the island is a suburb which is in fact part of Trogir. Ciovo was settled in pre-historic times, which can be seen from several of the buildings. There are traces of the Roman era here too. In the later Roman era Ciovo (then known as Bua or Boa) was a place of exile for prominent heretics. The monastic way of life began on the island as early as the late Roman era.

Marina is city 12 km west of Trogir, on the road to Sibenik. This village is surrounded by walls which were built in the l5th century, during the Turkish onslaughts. It was part of the property of the Bishops of Trogir. The gate of the castle is still standing, with their coat of arms, also there is a chapel and a tower which has been converted into a hotel.

Seget Donji is city 2 km to the west of Trogir, on the Sibenik road. This village was a planned settlement, surrounded by walls, built in the 16th century, during the period when the Turks posed a constant threat in this area. In the parish church there is a painted cruciﬁx from the l4th century which came from the circle of Paolo Veneziano. Sutilja Hill rises over Seget, on whose peak in the centre of a ring formed by the walls of prehistoric earthworks, stands the medieval Church of St. Elijah (Sveti llija). On the side of the hill, there was a stone quarry in the Ro- man era, from which high quality stone was extracted, some of it being used to make buildings such as the altar dedicated to Heracles. Near Gornji Seget (Upper Seget), in the village of Baradici is the Romanesque Church of St. Vitus (Sveti Vid) near which some monumental gravestones have been found, decorated with various symbols. Gravestones like this date from somewhere between the l3th and 15th centuries and can be found around other churches in the Trogir region. 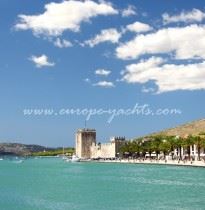 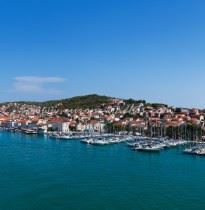 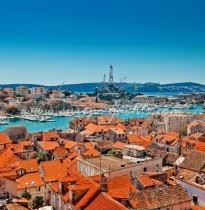 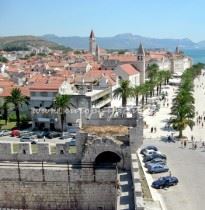 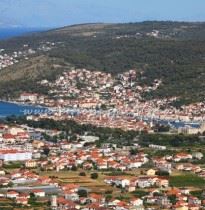