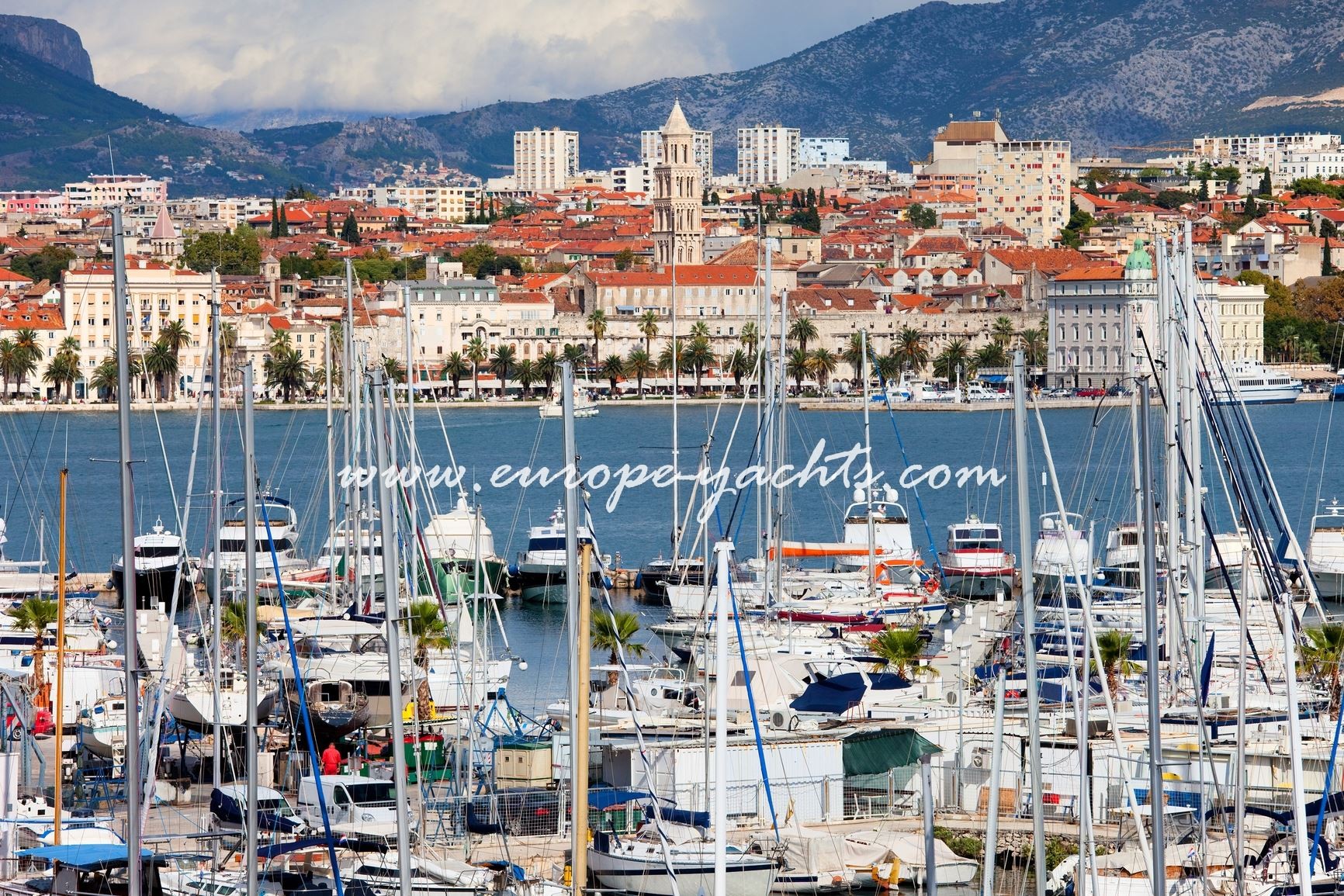 Split population is 180 000 inhabitants. Split is second biggest city in Croatia. It is the county of a county that covers an area of 4520 km2 and has a population of 468 000. In the broader area around  what is now Split, remains of pottery,  weapons and jewellery have been  discovered, demonstrating the existence of  human life on the Split peninsula very  early on in history. In the Krcine caves  above Klis, remains of “impresso” ceramics  (with decorations pressed into the clay)  have been discovered. In Kucine there are  ﬁnds from the Neolithic era, from  the same period as those from  Markova spilja caves (see  below) on Hvar, and in    the centre of Split itself a   stone hammer was found  dating from the middle  Neolithic era.

Copper  and gold items from the  2nd millennium BC  conﬁrm the existence of  well-developed trade routes in  this region, both with the  hinterland and with the  Mediterranean. In the last centuries  BC, the Illyrian Delmati tribe moved  into the Solin-Kastela bay and Salona (Solin) became an important military base and port. The Cathedral of St.  Domnius (Sveti Duje),  is an octagonal building  built at the same time as  the palace, as a mausoleum  for Emperor Diocletian.  In the 7th century the  mausoleum was converted  into a cathedral. Thus  fate played strange games  with Diocletian; in the  mausoleum of an Emperor  who sought to wipe out  Christianity, a cathedral  was built, and in the main  Roman temple, a  baptistery. The cathedral is  circular inside, divided up  by four semicircular and  square niches, and eight  columns in the lower part  on which eight smaller  columns rest. Between the  ﬁrst and second rows of  columns there is a frieze  with scenes of Eros  hunting, and amongst  the ﬁgures, a portrait of  Diocletian with his wife  Prisca. The ornate  entrance is typical of  Hellenistic architecture.  The cathedral is crowned  with a brick dome which  was originally covered  with mosaics. Beneath  the cathedral is a crypt  (St. Lucy’s Chapel;  Sveta Lucija). The sixsided pulpit belongs  to the late Romanesque  era (the second half of  the 13th century). The  main altar was built in  the l7th century. There are  paintings on it by the  prominent Croatian artist  Matija Poncun (Ponzoni).  The northern altar (from  1770 known as St.  Domnius’ altar) is the Work  of the Venetian sculptor G.  M. Morlaiter from 1767.  The right-hand altar (in the  southeastern niche)  is the old altar of St.  Domnius (Sv. Duje). It  was built in late-Gothic  style by Bonino da Milano  in 1427, and the ceiling  was painted by Dujam  Vuskovié in 1429. The  original altar of the saint  was an Early Christian  sarkophagus with a  depiction of the Good  Shepherd. In the north-  eastern niche is the altar of  St. Anastasius (Sveti Stas) a martyr from Salona.  The Baptistery (the  pagan temple of Jupiter,  converted to a baptistery  in the early Middle Ages) is  a square-shapecl building  which originally had six  pillars in the porch, and a  richly decorated portal.  lnside, the baptismal pool  itself is cross-shaped, made  up of six tiles, ﬁve of which  are decorated with braided  ornamentation, and the  sixth with the ﬁgure of  Christ. One theory says that  this is the ﬁgure of King  Zvonimir. Along the wall is  the sarcophagus of  Archbishop Iohn (Ivan), of  Roman origins, restored in  the 8th and 10th centuries,  and next to it is a  sarcophagus belonging to  Archbishop Lovro.  Other things to see in  the palace: With the  arrival of new inhabitants  the palace became a  living city, and a whole  series of signiﬁcant  houses, palaces and  churches were built and  ancient buildings restored.  The Romanesque-Gothic  palace beside the Golden  Gate with 15th  century Gothic additions  by Juraj Dalmatinac is  particularly outstanding.  The most important  Gothic palace in Split is  the Papalic’ Palace also by  Iuraj Dalmatinac. The  City Museum is now  housed in this palace (see  below). The Dagubio  family palace in Dioklecijanova street 1. was  built in the 18th century.  It is a Gothic and  Renaissance building  made by Andrija Alesi.  This leading Venetian  architect also certainly  designed the monumental  and typically Baroque  Cindro Palace in Kresimirova street in about  1700. The Church of St.  Philip Neri (Sveti Filip  Neri) was designed by  the Venetian architect  Francesco Melchiori,  a military engineer,  in 1735. Inside there is  an altarpiece by the 18th  century Split artist  Sebastijan Devita and a  wooden Crucifix of the  same time.

The Church and  Monastery of St. Dominic  (Sveti Dominik) stands  opposite the Silver Gate.  The monastery is a  radically restored Baroque  building. Inside the  church there is a beautiful  Baroque altar, and the  paintings The Mystic  Wedding of St. Catherine,  by the Venetian master  Antonio Zanchi, The  Miracle in Sariarz, by Matej  Poncun (Ponzoni), The  Miracle of St. Vincent  Ferrerius, by Sebastijan  Devita, and a late Gothic  illuminated cruciﬁx.  The monastery houses  beautiful antiphones  (from the 14th and 15th  centuries), a series of  paintings by Vinko  Draginja (1850-1926)  and books from the library  of Marko Marulic. Veli Varos is the largest city quarter, situated behind the Franciscan monastery. To the east it is bounded by Ielacic street and to the west by the Marjan cliffs (see below). It is characterised by irregular streets and pictu- resque architecture. The parish church of Veli Varos is Holy Cross (Sveti Kriz), built in 1681, but re—built in the 19th century. The beautiful Baroque bell-tower remains from the old church. On the main altar is a damaged but important Romanesque illuminated 13th century cruciﬁx, on the side altar an altarpiece by Sebastian Devita (18th century) and by Juraj Pavlovié (19th century) and on the facade, a large stone Gothic statue entitled Mourning dating from the 15th century. St. Nicholas on Stagnja (Sveti Mikul na Stagnji) is the oldest church in Veli Varos. lt is an early Romanesque building, built in the l2th century with square apses, a transept and a dome on a high drum. The builder, Ivan, and his wife Tiha are mentioned in an inscription over the doorway. Marjan is 178 m high hill. Marjan is the best known site for outings in Split. its unique position and beauty have inspired many poets, and thus Marjan is one of the most sung about parts of Croatia. Before Diocle- tian’s palace was built, the Romans built a temple to the goddess Diana on Marjan point. In the early Middle Ages the Statute of Split already regulated a service to take care of the area and the creation of Marjan as a place for outings began in the second half of the 19th century. The bare karst rock has been successfully cultivated, and there are now 168 hectares of Aleppo pines planted here. Some locations (the picturesque, vertical Ierolim cliffs) are nature reserves. The best way to reach the hilltop (151 in) is from Varos. Beneath the peak is the (Prirodoslovni muzej), founded in I924, with large zoology, mineralogy, botany and palaeontology collec- tions, showing items chieﬂy from the Dalmatia region. Beside the museum there is a zoo. At the foot of the southern side of Marjan (approach by the coastal road getaliste Ivan Mestrovic) is the city quarter known as Meje. On Sustipan peninsula, in the former Split graveyard there are the ruins of a Benedictine church and monastery, St. Stephen’s Under the Pines (Sveti Stjepan pod boro- vima), whose Romanesque and Gothic ruins have been included in a small church of the same name, dating from 1814. In Meje is the Museum of Croatian Archaeological Monuments (see below) and the Ivan Mestrovic Gallery. On the way from Meje up to the hilltop is the Chapel of Our Lady of Seven Woes (Gospa od Sedam ialosti) with a sculpture entitled Mourning dating from the 15th century. Poljud is the northwestern part of the city, joined to the southern part by a tunnel running be- neath Marjan. In Topuska street, on the sea front, there is a Franciscan church and monastery. The church was built on the site of an older 10th century church. In the centre of this picturesque complex of sacred buildings there are simple Renaissance cloisters with a well and some gravestones, including ones belonging to Bishop Toma Nigris-Mrcic, Katarina Zuvic, the Alberti, Marulic, Cuteis, Capogrosso families etc. The monastery is fortiﬁed with a strong Renaissance tower and battlements. The Gothic and Renaissance singlenaved church with its two side chapels on its southern side houses several signiﬁcant works of art. 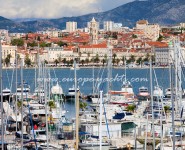 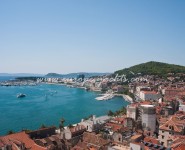 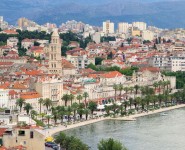 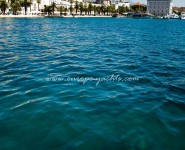 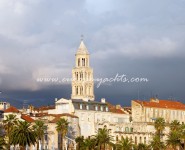